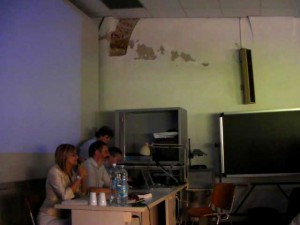 Libya has a variety of significant tourist attractions across the country, including stunning landscapes, green mountains, lakes, desert, complete Roman and Greek cities, old Islamic cities and the remains of prehistoric civilizations; it possesses five UNESCO World Heritage Sites, three of which are Roman and Greek classical ruins (Leptis Magna, Sabratha, and Cyrene). Other natural attractions are the desert old town of Gadames and Tadrart Acacus prehistoric petroglyphs. On the other hand, the Jabal Gharbi Area, more than 2.000 km2 wide that is scattered with thousands of Autochthonous Vernacular Architecture artifacts, is still neglected by both Libya and Western Scholars. The result is that both Western and Libya Tourism shareholders still do not consider the Jabal Gharbi area as an objective of Tourism. The whole Jabal Gharbi area can become an adjunctive and very valuable target of primary importance for ethical and solidal tourism. Wadi Adrar Fondazione onlus describes in this work the results obtained in survey, measure, and 3D photogrammetric reconstructions of the architectural heritage in the Jabal Gharbi, in the Missions performed since 2006. Results will be used to draft the first syllabus and tourist guide of the area, and will be made available to the Libyan government to be used as a basis for the Libya Government application of insertion of the area in the UNESCO World Heritage List.