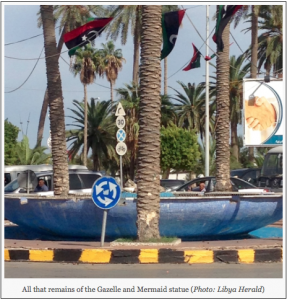 After the recent destruction of the Italian-era Ghazala statue in Tripoli as well as the vandalism of several sites within Tripoli’s Medina (old city), UNESCO says it has grave concerns about the protection of Libya’s heritage sites.  It, the EU, local organisations and others have expressed their condemnation of the destruction and vandalism.

“Libyan heritage is the expression of a shared memory of the country, and its respect represents a cornerstone for long lasting national reconciliation. I therefore urge all parties, as well as the Libyan population, to commit to and act for its safeguarding.  Parties should refrain from using cultural property and its immediate surroundings for military purposes likely to expose it to destruction or damage as well as to abstain from any act of hostility directed at such property,” said the Bokova.

Smugglers have also used the current chaos in Libya to traffic stolen artifacts, smuggling them out of the country. UNESCO is working with Interpol and other law agencies to protect Libya’s cultural treasures from trafficking and to stop the import or sale of items pillaged from Libya.

Besides law and customs agencies, Bokova has asked Libya’s neighbouring countries to remain vigilant to any attempts to smuggle items out of Libya.

“UNESCO is further engaged with Libyan cultural professionals and NGOs to reinforce emergency measures for cultural heritage protection, and enable the rapid assessment, documentation and monitoring of heritage. We will spare no efforts in supporting Libyans to protect their rich cultural heritage” continued Irina Bokova