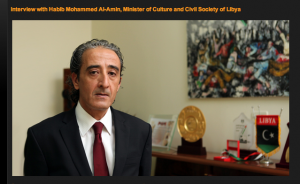 According to the theory of the movement of the Mediterranean sea, people says that Libya was the land of origins for all the Mediterranean nations including the Pharaohs.  Change occurred in the ministry of culture after the revolution, the previous ministry worked in exceptional situation as it was during the time of a caretaker government. Now this ministry has the support of the civil community and works as a part of another caretaker government. The time table we should work by is a tight one since 5 months already passed from the 1.5 years designated for this government. So, all the ministries made short term plans according to this short time table