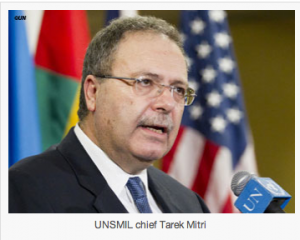 Members of the Supreme Council of Amazigh have met UNSMIL chief Tarek Mitri  to discuss with him their concerns that the new constitution will not embrace the rights of the country’s ethnic groups, including those of the Amazigh themselves.

After yesterday’s meeting, Mitri said that Libyans should be pursuing a national dialogue to resolve the issue of ethnic rights.  He stressed that Libya’s political system is its own affair, as the drafting of its new constitution is also a sovereign Libyan affair.

Nevertheless, he emphasised the importance of consensus in the writing of the document, because it is to be a social contract, that will draw together all citizens on the basis of nationality, without discrimination.

The UNSMIL Senior Public Information Samir Ghattas told the Libya Heraldthat the mission supports all the different ethnic groups across Libya, in line with the UN’s international legislation and charters supporting political and cultural rights.

Many Amazigh were dismayed when last week’s demonstration outside the General National Congress turned ugly and some protestors invaded and damaged the building. Hundreds of Amazigh had been demanding their rights be protected in the constitution and that they should  be adequately represented in the constituent body drafting the constitution.

Amazigh Supreme Council spokesman, Khaled Al-Zakri, said after the meeting with Mitri, that the UNSMIL mission had expressed its readiness to continue with those responsible in the government, to support the rights and culture of minorities in accordance with international conventions.