Amazigh turn gas back on as “goodwill gesture” before GNC vote 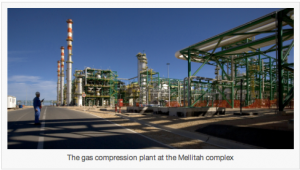 Amazigh militants protesting “inadequate” protection for minorities in the draft constitution, have said that they will lift their blockade of the trans-Mediterranean Greenstream pipeline at Mellitah, which has slashed gas deliveries to Italy.

Ayoub Soufian, a member so the Supreme Amazigh Council told the Libya Herald this evening that the gas would start flowing again on Sunday, which is the same day that the GNC is due to debate a key amendment in the constitutional process.

Soufian described the lifting of the blockade as “ a good will gesture”, but he warned that if the GNC did not agreed to change the voting system, by which the members of the constitutional assembly will be selected, the gas will be turned off again. The Amazigh want more than the two seats currently reserved their representatives  on the 60-member Constitutional Committee.

There has been some dispute as to the extent of the shutdown at Mellitah, which Amazigh sources say began last Sunday when armed men entered the compound.  On Wednesday NOC insisted that the protestors were confined to  a small part of the complex and there was no interruption to flows of gas or the loading of crude.  However the same evening  Paolo Scaroni, boss of Italian oil company ENI, which operates the gas and oil terminal in partnership with NOC, said: “the Greenstream pipeline to Sicily is under attack”.

It appears however that some gas has continued to flow to Italy. This is because the Greenstream also takes associated gas from the offshore El Bouri field, whose oil production of between 60,000 b/d and 80,000 b/d is the only Libyan crude currently being exported, since all other terminals, fields or pipelines have been blockaded.