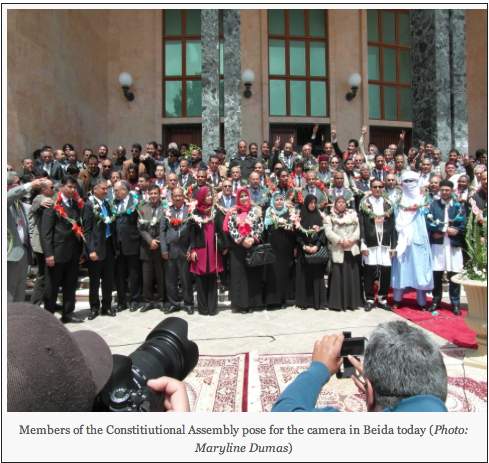 The Constitutional Assembly met for the first time today in Beida in an event that was more about self-congratulation than a working session. However, aware that they have a great deal to do in drafting a constitution, the members started with a clear message directed to the General National Congress (GNC): “We exist. We are independent and legitimate.”

The midday ceremony was fully of symbolism to demonstrate that the Assembly was as much a fully elected and legitimate institution as the GNC.

After the elections on 20 February, the Higher National Elections Commission (HNEC) announced that 13 seat out of the 60 seats had remained unfilled because of boycotts and violence. Congress has since told HNEC to organise new elections for the 13 seats but meanwhile a 48th member from Kufra has been recently established after the courts decided to formalise the election there despite the Tebu boycott.

The fact that 12 rather than 13 seats still need to be elected was not seen as a delaying factor in devising the constitution.

“The Assembly can start from now even though not all the members are elected,” said Abdallah Safit, head of the committee in charge of the organization for the constitutional assembly. “There is no legal measure to prevent them.”

“We were elected two months ago, so we have lost a lot of time because of the Congress. We must build the new Libya now”, Dr Ibtessam Abhih, an Assembly member from Benghazi, told the Libya Herald.

She had already decided to stay in the hotel booked for elected members until the draft of the constitution was written.

“Do not betray the people”

Members were greeted one by one by tribal leaders and heads of local councils in the area. “You are history makers. Don’t betray the people, because they chose you and in you,” said Ali Hussein Mohamed, the elected Mayor of Beida Municipal Council, in one of the  strongest speeches at the ceremony today.

Tonight, GNC members, ministers and diplomats are expected to take part in the second part of the ceremony in which Al-Touati Abu Shah from Beida as the oldest member will be act as president while Ramadan Atouijar from Al-Ajilat will be the rapporteur as the youngest. A new president, a deputy, a spokesman and a rapporteur will be elected later by the assembly.

Today has not brought any more news about how the constitution draft will look like. However, this newspaper interviewed six members from the east, west and south of the country and all were in favour of a presidential system. “The presidential system is best because the GNC has showed that a parliamentary one causes too many political clashes which prevent to progress”, Salahadin Abou Khazam, from Wadi Al Shatti, explained.

Additionally those spoken to did want the tribes to have any institutional powers under the future constitution.

No taboo issues and transparency

“The constitution should be above all the tribes”, Obeidi Zaroug, from the Awlad Sulaiman tribe, said even though he was wearing traditional tribal costume. On the other hand, he said he wanted a part of oil revenue to go directly to local areas, as he said happened under the the kingdom and which is one of the demands of the federalists…

“Every issue should be put on the table. The only base is that each Libyan citizen has to be equal”, said Dr Alhadi Abou Hamer, a member from Bani Walid. He wanted the committee to talk about the fate of IDPs (especially Tawarghans), Libyan exiles and the accuracy of the Political Isolation Law.

Talks are expected to be heated during the summer months in the old Beida Parliament building. To avoid any suspicion of secret agendas, members told this newspaper that they would ask discussions to be open to the public. “Facebook pages, TV stations, surveys, meetings all over the countryand the like. We have to be as transparent as possible because we are cooking hard stuff”, Dr Mohamed Balrouïn, from Misrata, said.

All the members met yesterday for the first time but already rumours about some of them being secretly supported by political parties have leaked out. “I am sure there are members who have Islamist or liberal hidden agendas but it is too soon to know who is who”, one member said.

According to the initial roadmap, the Assembly has four months to draft the constitution. International experts agree say it will not likely happen so soon.

“My main concern, however,  is more about security. Bayda is located between Benghazi and Derna militias…” a civil society activist said. 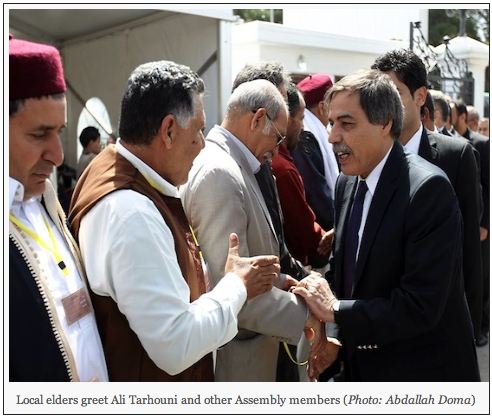