It’s Not Too Late For Libya 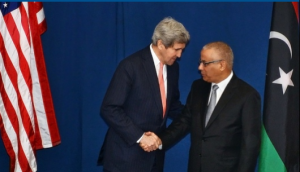 Secretary John Kerry’s attendance at the Rome Ministerial Conference on Libya last Thursday is a positive—and much-needed—signal of renewed US attention to that troubled country. After the tragic events in Benghazi and partisan mudslinging that persists until today, support for Libya’s tenuous democratic transition slipped down the ladder of priorities for the Obama administration. Despite being overshadowed by the Ukraine crisis, the international gathering was important if only to galvanize international attention on Libya and reinvigorate support to address both the political and security dimensions. One hopes that the high-level US presence might prompt some renewed attention from Washington, not only this week but in the weeks and months ahead.

Whether accurate or not, the perception of US inability or unwillingness to be actively engaged on Libya is pervasive not only inside the country, but also among our European allies. On a recent tour through Brussels, London, Rome and Paris discussing the Arab countries in transition, there was a great deal of hand-wringing about Libya, and this included references to US reticence to be more engaged. The overriding sentiment in each capital was an almost paralyzing sense of fear about deteriorating security; a high-ranking diplomat in the French Foreign Ministry characterized Libya as “an absolute nightmare” and echoed by a senior official in Italy who described it as “a complete disaster.” Despite the consensus among Europeans on Libyan security and the need to address threats emanating from its shores—drug and weapons smuggling, human trafficking, and jihadi networks—there remains a prevalent lack of agency and direction about how to accomplish this. In part, it reflects the dominant feeling among both Europeans and the United States regarding the inability of Western policy makers to influence or leverage to shape events on the ground, not only in Libya but throughout the Arab world. International partners, however, must resist the urge to succumb to this sentiment if they wish to provide Libya the support it needs at this critical and precarious moment in its history.

Even though Europeans have much more at stake given Libya’s proximity—and recognize their special responsibility for what happens in the southern Mediterranean region—many European partners expressed disappointment that the United States has not demonstrated much of a leadership role. Given that France and Britain led the way for the NATO mission in Libya, perhaps this is unsurprising; frankly, it provides a golden opportunity for the European Union, particularly Italy and France, to demonstrate greater initiative. Yet to date, the EU and European states have not forged an effective, sustained, and truly coordinated approach that would help Libya emerge from its security and political morass.

Some European officials will point to Libya as the one case where in fact the international actors are working cooperatively, but scratch below the surface and one quickly learns that the various EU, UN, NATO, US, and European bilateral programs suffer from a profound lack of coordination. Multiple players and initiatives—including the EU’s Border Assistance Mission (EUBAM), the UN Support Mission in Libya (UNSMIL), international efforts to create and train the General Purpose Forces (GPF), and other bilateral security assistance programs implemented by the United States, France, and the United Kingdom—are all trying to improve the security climate through discrete programs, but the net result is that very few troops have actually been trained to date. NATO Deputy Secretary General Ambassador Vershbow pledged support in advising the Libyan authorities on developing a national security strategy with a NATO advisory mission, but made it abundantly clear that the NATO advisory mission will “not seek to establish a full-time presence on the ground in Libya.”

Clearly, NATO and the Europeans are reticent to consider a more robust role, yet several members of the European Parliament lamented that an important opportunity had been missed by the EU in the early days after Qaddafi’s fall, and now the stakes are far higher. Militias and armed separatists challenge a weak and beleaguered central authority, yet a fragmented country would be a serious concern to Mediterranean neighbors to the north. While Europeans are attentive to this danger, most initiatives exist on only paper and their ability to implement the intended course of action is heavily constrained by lack of Libyan interlocutors and institutions. Equally troubling, the Europeans focus on helping to establish a security framework, but without sufficient attention to the underlying political, resource, and identity issues feeding the instability.

The organizers of the March 6 Ministerial Conference designed the gathering to boost international support to Libya’s transition process and beleaguered leadership at a critical moment. Unlike previous international conferences in London and Paris that focused exclusively on security issues, the Rome conference reflected a far more nuanced understanding of the inextricable links between the political and security dimensions. The discussions focused on the need to forge agreement among Libya’s diverse tribal, religious, and ethnic populations and to navigate a path forward that addresses the mandate of the General National Congress, constitution-writing, and the conduct of elections in a way that is seen as legitimate among a majority of Libyans.

Often missing in discussions about Libya is the sense that an opportunity still remains to help forge functioning democratic institutions and a governance structure that could achieve the aspirations of the Libyan people. Europe views Libya solely through the lens of threats and risks, which is understandable, but a stable and secure Libya can only be achieved with an inclusive and accountable political system that delivers basic services, creates economic opportunity, and addresses the grievances of various political and ethnic groups.

Secretary Kerry’s remarks struck the right tone, noting his and other ministers’ presence “demonstrate[s] our commitment to Libya’s democratic transition. And we recognize that this is really a pivotal moment for Libya as it drafts a post-revolution constitution and moves towards national reconciliation and elections.” Yet the prevalence of the security focus was not far, as Kerry noted: “We will continue to work closely to fight terrorism to prevent the spread of conventional weapons and to secure those weapons where they should be secured and to build democratic institutions.”

To do so will require a whole-of-government approach that extends to the international level and brings together the resources, technical assistance, and attention of the United States, EU, UNSMIL, NATO, key European states, and regional actors including Turkey and the Gulf states. Domestic efforts and international assistance has already laid the initial groundwork for such an approach on security issues, but success requires sustained and ongoing attention at the highest levels, and such efforts need to extend to political and economic development as well. Although Libya boasts enormous oil wealth, such resources are not readily available to feed, educate, and employ its citizens, and international technical assistance will be needed in the interim.

While Iran and Syria might appear to be more immediate concerns for the United States, getting it wrong in Libya would have equally disastrous consequences for US and allies’ long-term interests. More importantly, there is still a chance to get it right. Though US and European influence may be weaker than years past, Libya is a place where robust engagement with the requisite resources could actually make a difference. With US attention elsewhere, Libya might be a critical test of Europe’s ability to continue taking the lead.

Danya Greenfield is the acting director of the Rafik Hariri Center for the Middle East at the Atlantic Council. 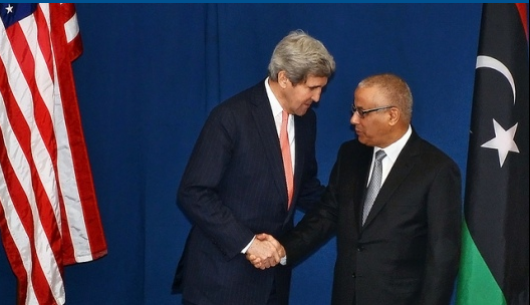 US Secretary of State John Kerry shakes hands with Libyan Prime Minister Ali Zidan during the Rome Ministerial Conference on Libya in Rome, Italy on March 6, 2014. (Photo: US State Department)