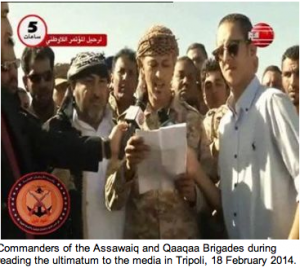 Commanders of the Assawaiq and Qaaqaa Brigades during reading the ultimatum to the media in Tripoli, 18 February 2014.Tripoli— The five-hour ultimatum has come its end and unofficial sources say negotiations are now ongoing between the two armed groups that issued the ultimatum earlier this day and unspecified mediators.The head of the UN Mission (UNSMIL) in Libya Mr. Tarek Mitri is playing a part in the negotiations to solve the political dispute between the National Congress whose mandate ended on 7 February and the Libyan people who demand it to stop its activity as a whole.

Two major armed groups that played a major role in ending the oppressive regime of Muammar Gaddafi demanded the outgoing National Congress to hand over power within five hours from the moment of issuing the ultimatum. It was issued at 3:00pm local time.

In response to this ultimatum, the president of the National Congress Nouri Bousahmain that he rejected it and called on the Libyan army and the Chiefs of Staff to stop what he said an attempt to take over power by force.

Speaking to a local TV station Tuesday evening, the former libyan Minister of Defense Mohamed Baraghathi down played the call for the army to intervene saying that this won’t happen as the army will not accept being drawn in a conflict with Libyans.

Baraghathi said the General National Congress had already lost legitimacy on 7 February and its president has no legal authority to order the military or its Chief of Staff to move.

Sources who do not want to be identified told The Tripoli Post that the military Chief of Staff made contacts with the revolutionary groups and assured them that the military would not head Mr. Bousahmain’s orders.

The two groups are Assawaiq Brigade and Qaaqaa Brigade which represent two of the most disciplined armed groups in Libya.