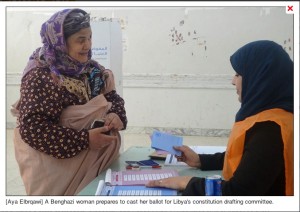 By Essam Mohamed in Tripoli, Aya Elbrqawi in Benghazi and Izaldeen Ahmed Moktar in Sirte for Magharebia – 21/02/2014

Libyans headed to the polls on Thursday (February 20th) to select members of the constitution drafting committee.

Turnout reached 45 per cent of registered voters, according to the country’s High National Electoral Commission (HNEC).

“I would like to congratulate the Libyan people on this historic event, which constitutes a major milestone towards the democratic path and building a state of freedom, prosperity and justice,” HNEC Chairman Nuri al-Abbar said late Thursday.

However al-Abbar noted that the vote was marred by violence in several areas.

Poll worker Salem Attiya Boujidar Al-Mansouri was killed by gunmen in Derna. Five polling stations in the eastern city were also bombed on the eve of the election and a sixth was shut down by militants the day of the vote, according to AFP.

Two polling centres were stormed and set on fire in Ubari, according to Libya Herald. Voting in the town was halted after protestors burned ballots. Similar violence erupted in Kufra, where three polling stations were shut.

But despite the violence, many were proud to be given a voice “after 42 years of deprivation,” said Abou Bakr Sasi, an information technology engineer. “My tears fell, and this is a great feeling when you have the freedom of choice.”

He added that this was an experiment and an opportunity he would defend for his children and future generations.

For his part, Ali Youssef, a university professor, cast doubt over the figures recorded. He pointed to the multiple assassinations in the east of the country, including the murder of a Benghazi judge.

“There were also attacks on media outlets, such as the attack on al-Assema TV station, kidnappings of journalists in western Libya, two coups this week by Maj. Gen. Haftar and Qaqaa and Sawaiq brigades against legitimacy in the country. No constitutional election can take place under this chaos and deteriorating security situation,” he said.

In Derna voters were equally upset with the chaotic security situation.

Lawyer Baset Mahmoud, 39, rattled off a list of problems, from lack of faith in the election law to intimidation by terrorists in Derna.

Anas al-Sharif, a young man from Benghazi on a visit to Derna, said he heard five explosions. “Two of them almost made me cry out of fear and sadness,” he added. “Blasts targeted al-Dhiaa, Fathi al-Tira, al-Zahraa and al-Kholoud schools. The pictures are too horrible to be published.”

At noon the following day, al-Sharif said that “adhan could be heard, and so could be the prayers of those terrified people of Derna hoping that God would deliver them from all this destruction, death and blood.”

“I mourn Derna, the city of culture, theatre, music and art,” he continued. “I feel like getting out and bringing people together so we can cry and weep until the evening.”

Mariam Hasan, 38, a teacher based in Derna, said the situation in the city was “horrible”, adding, “No polling stations are open, and groups are terrorising people and accusing them of kufr.”

“Derna is witnessing the assassination of judges and army officers,” she added. “They haven’t spared anyone; everyone is just waiting for his turn. Derna has been usurped and is in pain. Derna is a special case and its people are suffering while no one is caring about them, neither the government nor the General National Congress.”

“There are assassinations and bombings every day that terrorise us from the extremists,” the teacher said.

However, Dr Intissar al-Akili, a member of the former National Transitional Council (NTC), expressed her happiness at the election: “Thank God, we voted today out of honour for martyrs’ blood and to confirm our desire to build the state of Libya. I wouldn’t miss this great national event.”

Meanwhile in Sirte, election officials, local authorities, security and health staff were all prepared for the event to make sure the election would proceed smoothly.

“Today’s election was correctly held in spite of all violations,” said Yasmin Ahmed, 23. “Yes, we participated in election although I’m not happy that Amazighs, Toubous and Touaregs didn’t take part in it.”

There were 20,000 registered voters in Sirte and those who actually voted totalled 10,000, according to initial results from the HNEC.

“I voted for those who really deserve it, away from provincialism or regionalism,” said Ahmed Lamine, a 61-year-old businessman. “I think there is good election awareness as compared to the 7/7 election.”

“I hope everyone will take part in building the state of Libya that Libyans dream of,” he added. 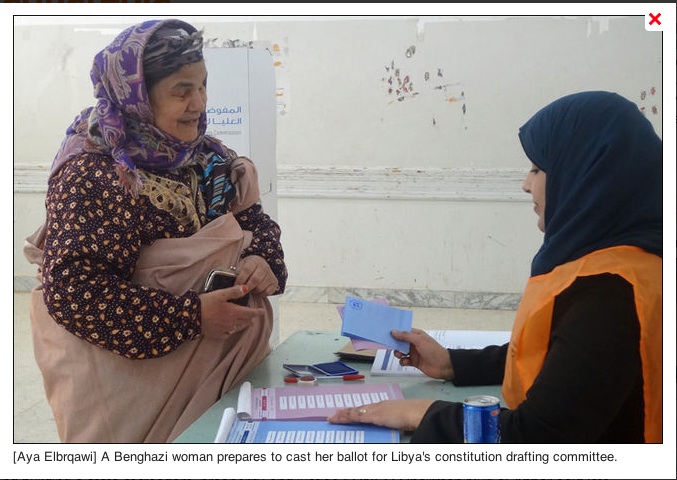