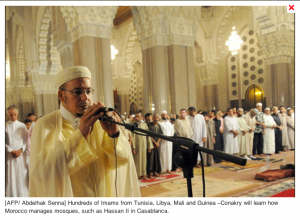 Imams from Libya, Tunisia and Guinea-Conakry will soon follow their peers from Mali and receive training in Morocco.

While in Bamako last September for the inauguration of President Ibrahim Boubacar Keïta, King Mohammed VI of Morocco offered to train 500 Malian imams.

“We are Morocco. We have shared an open, convivial and tolerant Islam. We also share the divine word,” Diallo said.

The Moroccan ambassador to Bamako noted: “We share with Mali the Maliki School.”

“There is perfect harmony between us in terms of training imams as well as in terms of religious practice which reflects moderate Sunni Islam,” Hassan Nassiri added.

“We will train these imams according to the principles of Islamic moderation and tolerance,” the ambassador confirmed.

“It focused on training imams, religious guides and preachers, and on developing a strategy to adjust and organise mosques,” Kanbouri told Magharebia.

The initiative was duly noted by Morocco’s Maghreb neighbours.

The countries aim to benefit from the Moroccan experience in building and running mosques, as well as for training courses in the field of management of religious affairs and moderate Islamic discourse.

As Cheikh Abdelbari Zemzami of the Moroccan Jurisprudence Studies Society pointed out, “Morocco was known since ancient times for moderation in dealing with religion.”

During his visit to Rabat last week, Mehdi Jomaa praised “the special attention that His Majesty the King paid to the request of the Tunisian government on strengthening co-operation in the religious sphere, particularly in the area of training Tunisian imams in Morocco”.

Under the Moroccan programme, visiting imams will study the Qur’an, Hadith, Islamic sciences and Arabic.

Classes in history, geography, the history of Islam, human rights, mental health, media and astronomy will also be provided to the foreign imams.