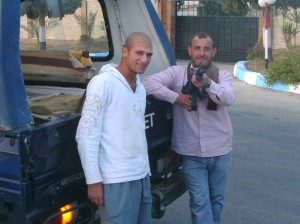 (Report on London Meeting about Libya)

Libya post-Gaddafi is a country full of contradictions. But Libyans are ready for democracy if only they can first have a national, communal, and regional reconciliation, then muster the rule of law to defend the newly established consensus and finally can get bold and competent leaders to chart a course for a post-communal future.

That was the conclusion of Jason Pack, a researcher of Middle Eastern History at the University of Cambridge who addressed a meeting on the struggle for the post-Gaddafi future organised by the Council for the Advancement of Arab British Understanding in the House of Commons in London.

The meeting was also addressed by Noman Benotman a former commander of the Libyan Islamic Fighting Group (LIFG) and president of the Quilliam Foundation, a counter extremism think tank and Nicolas Pelham a Middle East correspondent for the Economist.

Pack, the editor of The 2011 Libyan uprisings and the struggle for the post-Gaddafi Future described his discussions in the Jabal Nafusa researching popular opinion in the small Berber (amazigh) community.

“In the town of Jadu, home of the most powerful Berber militias, I met members of the local military and town council. They spoke of an Arab conspiracy to rally behind the Islamists and the demand that Arabic be the country’s only official language as a way to make the Amazigh community gradually lose its culture.

“These gentlemen spent hours trying to convince us that all Arabs want to repress the Amazigh – this is why they are short changing them by giving the Libyan minorities (Amazigh, Tuareg, and Tubu) “only” 10% seats on the constitutional committee while claiming that Berbers alone are 30% of the Libyan population.

“This discourse is quite telling as even without accurate census data scholars are certain that non-Arab minorities comprise less than 6% of the Libyan population,” Pack said.

“Understanding the persuasiveness of these Libyan discourses explains why, federalism that lacks any compelling economical, historical, or structural logic, is so popular with large swathes of the population. It appeals to the wounded pride, paranoia, and discourse of deprivation which characterises so many of Libya’s insular communities.”“Yet the central government is actually bending over backwards to appease a range of mutually contradictory demands and in so doing voting away all of its own power.
“This attitude, aside from being very destructive, is shocking because the composition of the constitutional assembly is greatly skewed in favour of the regional minorities and the less populated areas of Cyrenaica and Fezzan. Yet many of the inhabitants of these areas emotionally claim and truly believe that they are still oppressed and that they should reject the central government.He was concerned that it is a zero sum discourse, where each locality/region/or ethnic or tribal grouping claims to have been wronged under Gaddafi and is demanding redress in terms of special privileges, over-representation, and government funds.

Pack described the security situation in Libya as ‘simply abysmal’. “Since the murder of American Ambassador Chris Stevens in Benghazi a year ago violence has increased exponentially in Libya’s eastern province while the central government has become powerless to apprehend the perpetrators.

“Even in Western Libya, carjacking and other non-politically motivated acts of criminal violence have become so prevalent that western firms have pulled their staff or insisted that they can only leave their five star hotels in armoured vehicles.

“More serious than even the rise of mass criminality, is that over the last weeks the country is facing its greatest and economic crisis since the 2011 uprisings which toppled Gaddafi. The disastrous, economic and social effects of the current oil strikes have crippled crude oil production.

“And yet the faltering economy is only a symptom and not a cause of Libya’s ailments: it is the lack of political leadership and strong institutions which give rise to the inability of the country’s leaders, civil society or burgeoning private sector to find a way to fill the power vacuum.

“This perspective is in line with my long-standing hypothesis that events in Libya were not actually a unified revolution but a series of disconnected and ill-coordinated uprisings caused by the specific social, economic, tribal, religious, and ethnic forces at play in the country.

“Moreover, in overthrowing Gaddafi, the scattered rebel militias of what I term the periphery overthrew the centre of power without creating any institutional framework to replace the one they dislodged.”

“Developments since 2011 have re-created those power relationships that prevailed for more than a century, as in the process of defeating Gaddafi Libyan society was mobilised along local/regional/tribal/and religious cleavages and the militias that came into being were united only for the purpose of ousting the dictator.

“When he was gone the possibility for a transformative discourse that would unite Libyans and help them exit the centre/periphery trap existed but it was not sufficiently seized upon by the new leadership.”

Turning to the issue of what the UK can do about the situation in Libya, Pack said that Britain in particular has both the ability and incentives to lead. The British based firm, Pace Group, is hosting the FDI Libya conference in London on September 17-18 that will bring together international and Libyan businessmen and politicians who want to start the engine of the Libyan private sector as well as ramp up government to government capacity building assistance.

“Yet counterbalanced against those positive indicators is the most important failings of the GNC where the UK could help significantly: the constitutional process and security. Parliament should vote emergency funds or do a deal with the Libyan authorities so they can pay for their own high level capacity building aimed at helping Libyan ministries function.

Because of the killing of the American ambassador in Benghazi and the partisan infighting in Washington over who is to blame for the tragedy, Libya is a political football that Obama doesn’t want to touch.

France lacks the trans-Atlantic relationship and connections to the Arabian Gulf that are needed to muster a broad international consensus to double down in Libya.

In fact, only Britain possesses these assets and thus the potential to lead. Egypt and Syria are not the only crisis afoot in the Arab World and today’s world demands multitasking in foreign policy as well.”

Pack concluded that Libya could become a Britain-friendly oil giant, with great rewards accruing to the British firms involved both in the oil industry and all the other services that Libya needs such as hospitals, English language training, construction, and finance.

Most crucially, if Libya were to become a failed state, it could easily become the centre for arms and radicalisation right on Europe’s doorstep. David Cameron was courageous to support the Libyan people with a no-fly zone. The war is won, but it is high time to not let the peace slip through our fingers.”

Nicolas Pelham said that Gaddafi was the source of decision making in Libya – the lynchpin that held the country together. His departure exposed cracks that had been suppressed for many decades and created new problems.

The uprising was not just against Gaddafi – it was an uprising of Benghazi: the disempowered east against the empowered west. Gaddafi’s death did very little to resolve the tensions between east and west that still play out today whether they are between the supporters of the old regime, those who favour devolution, those who look to an alternative order and those who believe the old order was not so bad.

The departure of Gaddafi led to a rush to fill the vacuum, a rush to grab the spoils. No single group has been able to establish authority over the whole country. The great skeleton that held Libya together – the water network of the Great Manmade River and the road system are falling apart.

Tripoli was without water, there are problems with power, there are huge queues at petrol pumps. The country can’t export the oil because various groups are controlling the ports. The Libyans are asking what they can do about it.

When Libyans talk about Libya they still see their country as an entity as seen by the support for the national football team and the Libyan flag. They do not want to see their country disintegrate and if it breaks up Egypt with 89m people could well desire some extra living room.

There is a desire to find a strong man who can pull Libya back together again – perhaps one of the former military commanders who fought during the revolution. There are also Islamic leaders.

Devolution is likely and contracts may be awarded by specific regions rather than by the central government in Tripoli. The municipalities are increasingly doing their own thing. There is the feeling in some circles that the Libyans got rid of one Gaddafi and created 100 more.

According to Noman Benotman the change in Libya was very positive but the transition to a democratic system after the change has failed. He emphasised that terrorists are in a minority in Islamic groups. Now it is very difficult to assess the role of the Islamists in post Gaddafi Libya: some people see them as a very positive force for change while others see them as the ‘bad guys’.

“For me the most important thing is, what is the reason for the revolution? It is a transition from an authoritarian regime to a democratic political system. Are the Islamists a positive force in this? Are they going to play the game by the rules? The Libyans as a society are never going to accept any radical group to rule them”.

Bentoman said that tribal influences were strong in Libya and no tribe wants to be responsible for a civil war. He described hundreds of groups found in Libya. Some are acting at the global cross border levels that believe in the Islamic nation. There are hundreds of nationalist groups and there are more than 145 official political parties.

“The Islamists are split into two camps: those who refuse the political process itself for ideological reasons. The jihadists believe that democracy is anti Islam.

“The largest Islamist group in Libya is the salafis who do not believe in violence, and do not believe in politics. Their main problem is the political parties themselves. They believe creating a political party that is not the nation itself is against the teachings of the prophet. They are in conflict with the Muslim Brotherhood.

“Other Islamic groups saw a political vacuum that has to be filled. They saw politics as a conflict between the Islamists and the rest. Because of this fight we ended up with zero resources to build the state itself.”